You are here: Home › El Paso Locomotive FC: On Track for Success
By Jon Bruning on October 23, 2018 in USL Championship 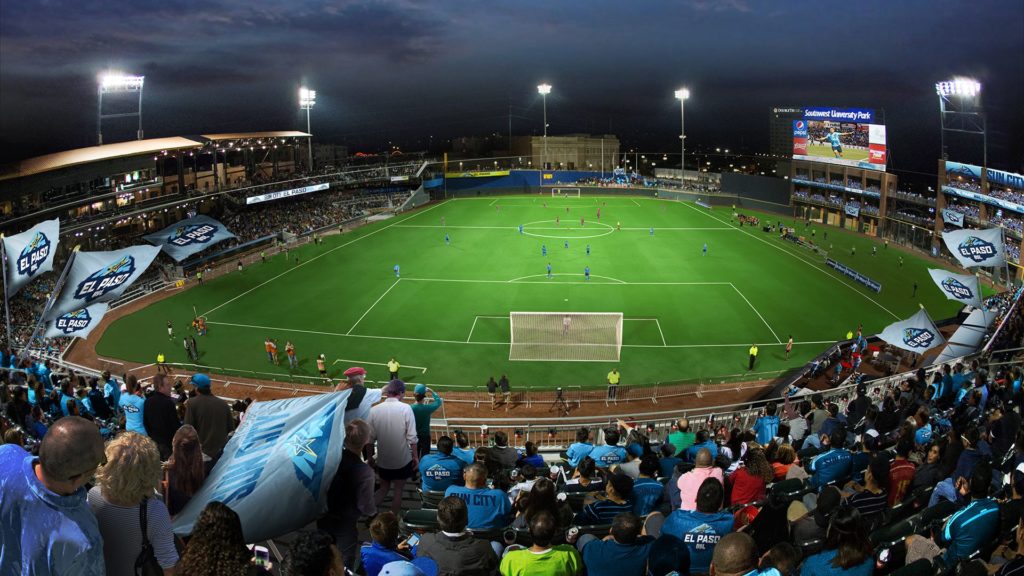 El Paso Locomotive FC got a name and a logo a few weeks ago, and this off-season, they will get a new home. The expansion USL Championship franchise has big plans for Southwest University Park, and even bigger plans down the road.

The stadium is uniquely well suited for the addition of soccer. Because it was built on a small downtown footprint, it was built up vertically. Though its capacity is only 7,500 seated, it includes a second deck of seats.

“The stands, though it wasn’t intended for soccer at the time, are tight to the field, so our sightlines lend itself to an awesome soccer experience,” said Andrew Forrest, the new club’s General Manager. “Fans can sit close to the field on the second level and see play develop and players move, or they can sit in the front row close to the pitch for the sounds and smells of the game…. Our stadium, while not originally intended for soccer, works out better than a lot of other baseball stadiums I’ve seen soccer in.”

A key part of the park’s makeover for soccer is how the dimensions of the field are being enlarged to accommodate a regulation USL pitch. One of the hospitality areas down the first base line is being changed in configuration, a wall is being moved, to make room. A few soccer exhibition friendlies have been played at the stadium in the past, but the pitch was not regulation size. One additional benefit of the project is a new bar/beer garden in the style of many other modern parks.

In addition to the reconfiguration, Southwest University Park is also getting a retractable mound to make grounds crew transitions easier—it retracts in less than 15 minutes to go from baseball to soccer. Additional usable fan space is also being added to the “Wooftop Deck” area of an outfield rooftop with new restrooms and canopies to deflect the hot south Texas sun.

Perhaps the most important off-season improvement for the organization may be the addition of upgraded locker room facilities. In addition to the baseball locker rooms, the new facility will house a dedicated soccer locker room with smart boards and dedicated USBs and individual sound and video systems at each locker. The club also plans to add space for the coaching staff and a new training room.

According to Forrest, “It’s going to be a high-tech, new level, 2018 locker room with all the bells and whistles to help us to be competitive. We want players to know that El Paso is a first-rate city and we do things first class, and we feel this locker room and the new stadium will be a reflection of that.”

The Southwest University Park renovations are just a part of the investment the organization is making in its soccer club and community. The organization is also installing two new pitches at Westside Sports Complex in the city. The pitches will be re-built them from scratch to meet professional standards. Good practice pitches are key, according to Forrest, since they have to share the stadium with the Chihuahuas. Forrest also hopes the new fields will also serve as a site for the team’s interaction with the local youth soccer community.

Forrest is excited about the new club’s inaugural season and is fully engaged in the hard work of getting a franchise off the ground. Hesitant to project too far down the road, he suggested that the long-term plan does include a soccer-specific stadium in or near downtown. “It is something that we very publicly want to do and have every intention of doing…. We hope that the baseball stadium, as great as it is, is a temporary fix. We’re thinking maybe three years…. The good news is that this stadium was built in less than 365 days, so when we do move forward, it will move pretty quick, and if it’s anything like the baseball stadium, it will be awesome.”

Southwest University Park, in its relatively short existence, has already proved to be a winner. For baseball, it is state of the art for site specific design and fan experience. With the arrival of professional soccer in El Paso, the stadium should prove a venue for a similarly great soccer fan experience. If the organization is able to replicate its baseball success with soccer success, a new stadium could be in the works for fans in El Paso in the near future.

It is an exciting time for El Paso. El Paso Locomotive FC, with a renovated stadium and a new practice facility for 2019, is a train on schedule. The club appears to be on track for success.