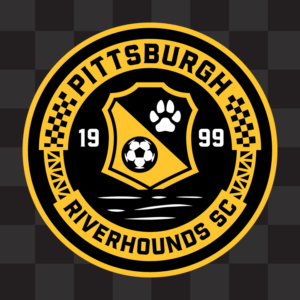 In advance of the 2018 USL season, the Pittsburgh Riverhounds SC have unveiled a new logo.

The club has swapped out its long-time “Hounds head” logo – the trademark of the club since 1999 – for a traditional badge look to coincide with an offseason of growth and change.

The lead-up to the 2018 season as a whole has been one of positive growth for the club. A member of the burgeoning USL, which confirmed its place as the second division of professional soccer in the states during the offseason, is complimented by the planned expansion of Highmark Stadium to 5,000 seats.

On the pitch, the Hounds will be led by head coach Bob Lilley, 2015 USL champion and architect of some of the most competitive outfits the league has had to offer in the past decade. In addition, the new brand is being led by worldwide sporting apparel and equipment supplier adidas.

“Tonight was meant to be a celebration of the excitement for not only the upcoming season, but also our fans and their support of this club over the past couple years,” Riverhounds SC owner Tuffy Shallenberger said. “This logo, this new era, has been something I’ve wanted to give the fans for a long time and I couldn’t be happier to see it all finally become a reality. We hope everyone can see the passion and dedication that went into this entire process, as we look to continue to build on and off the field and become part of this city’s rich sports culture.”

The new badge is rooted in the sporting culture of Pittsburgh. First and foremost, it is adorned primarily in Black and Gold to further solidify the club’s standing alongside the three major professional teams in the city. Traditional colors of the Steel City itself (most notably in the city’s official crest), Black and Gold signifies a considerable shift for the club’s identity from its original “brick and mud” scheme in its inaugural season to the blue used through the opening of Highmark Stadium. Paying homage to the 446 bridges that grace the landscape of the city, a literal bridge links the words Pittsburgh and Riverhounds SC in the outer band of the badge. The architectural elements are a direct inspiration of Fort Pitt Bridge, which has provided a formidable presence in the West Side backdrop of Highmark Stadium since the club began play at that location in 2013. Furthermore, a checkered pattern anchors both sides of the city name, drawing from the city’s crest as well.

A uniquely shaped shield centered within the badge provides striking character, inspired directly from capstone elements within the entryway of the Allegheny County Courthouse located downtown. Split diagonally in Black and Gold, the crest holds the defining qualities of the club and is bookended by “1999,” the inaugural year of play for the Hounds. Within the shield is a soccer ball, as well as a “Hounds” paw to forever link the club with the Riverhounds name.

The shield is buoyed in the element of water, as the three levels of waves represent the three rivers of Pittsburgh – the Allegheny, Monongahela, and Ohio.

Finally, the typography is custom, in direct inspiration of a wealth of unique examples found throughout the city defined primarily by a flare serif quality.