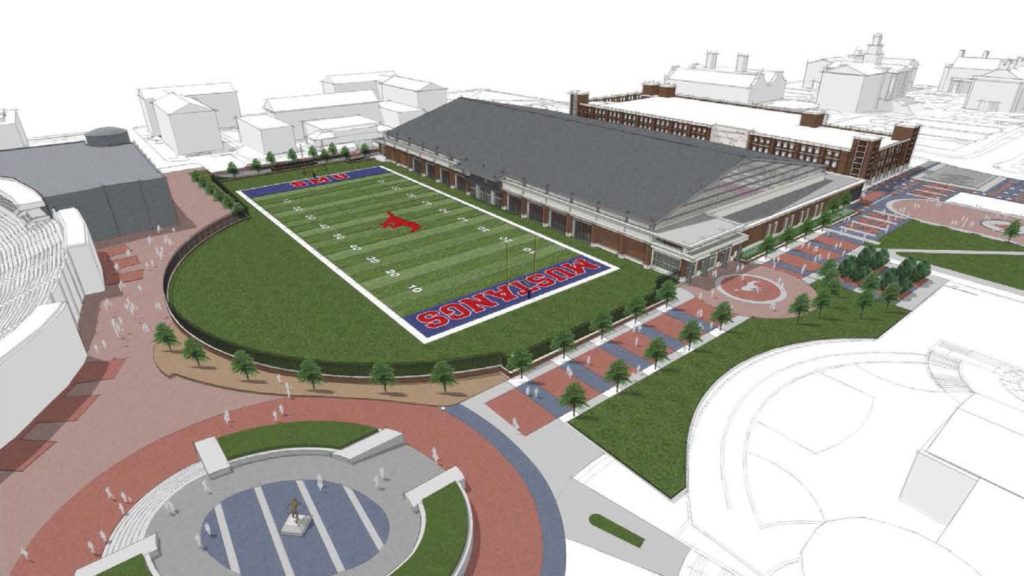 As part of a major investment in its athletic programs, SMU has announced a new stadium for men’s and women’s soccer. The new facility will be constructed along Mockingbird Lane, while the site of the current soccer stadium becomes home to an indoor performance center.

“This is a transformative plan for SMU Athletics and another tangible example of our commitment and desire to compete at the highest level of intercollegiate athletics,” said SMU President R. Gerald Turner.

The Indoor Performance Center (IPC) will feature a full-sized football field and indoor 300-meter track, and will be located on the current track and soccer field site. In addition to use by the football and track programs, the IPC will also serve as a resource for other student and campus activities and events. A new outdoor natural grass football practice field will be adjacent to the IPC. The new soccer stadium, to be used by SMU’s men’s and women’s soccer teams, will be located on Mockingbird Lane, the site of the current practice fields. These projects constitute Phase 1 of SMU Athletics’ Facilities Master Plan, a $150 million comprehensive facilities investment that will serve the needs of all 17 sports and 400-plus student-athletes.

“Our commitment to competing for championships and enhancing the student experience requires continued investment in student well-being and our people as well as our infrastructure,” said SMU Director of Athletics Rick Hart. “SMU and its donors and fans have made huge investments in athletics in recent years, and these projects are yet another step forward for our department.”

Lead and cornerstone gift pledges, representing 80% of anticipated construction costs, are actively being pursued in support of this project. The expected completion time is 16 months after construction begins.

In February, SMU broke ground on the Robson & Lindley Aquatics Center/Barr-McMillion Natatorium, a new 42,000-square-foot facility that will feature an Olympic-sized, eight-lane indoor pool with a platform diving area, four springboards, a 10-meter tower, coaches offices, locker rooms and a classroom and meeting area. In partnership with AT&T and the city of Dallas, SMU is nearing completion on Trinity Forest Golf Club, an 18-hole championship golf course designed by Coore & Crenshaw, Inc., which features a world-class practice facility, clubhouse and practice academy for SMU’s golf teams. In addition, current projects in progress with expected completion this summer or early fall include, replacing the Ford Stadium turf, renovation of the men’s basketball locker room and team lounge and resurfacing the track.

Private gifts in support of operations have been a critical component of SMU’s fundraising efforts as well. Per EADA reports, SMU has the second-largest athletics budget among non-autonomy conference schools and the second-largest football budget in the American Athletic Conference. Resources impacting the health, safety and well-being of all student-athletes have been enhanced in areas such as nutrition, mental health and equipment. SMU’s 17 varsity sports are provided the full complement of scholarships, up to the full cost of attendance. All of this is possible as a result of the generous support of the SMU community. Since 2012, Mustang Club annual giving has more than doubled, from $2.6 million to $5.5 million, and donor support of operations has surpassed $40 million over the last four years.

In addition to opportunities to contribute to the Indoor Performance Center and Soccer Stadium projects, gift and naming opportunities remain for Moody Coliseum, the SMU Tennis Complex featuring Turpin Stadium and the Brookshire Family Pavilion, the SMU Golf Complex at Trinity Forest and the Robson & Lindley Aquatics Center/Barr-McMillion Natatorium.