We have the renderings for the Minnesota United St. Paul MLS stadium, as the team and sports architecture firm Populous are going for a very modern, curvilinear look more reminiscent of modern European stadiums than existing MLS facilities like Sporting Park.

The new stadium is designed for a capacity of 20,000. The canopy extends around the entire seating area while also focusing light onto the playing field and not throughout the surrounding neighorhood.

It also has a very different look than the last big Minnesota project from Populous, Target Field. While that design was also modern, it incorporated plenty of strong angles and cantilevered covers. Here, the look is cool and a total contrast with the look and feel of St. Paul Midway area, which features plenty of two-story storefronts and modest dwellings. And while the goal of the design to combine a modern facility with plenty of street-level access, it certainly will be a major landmark in the Midway skyline — you’ll see the curvy canopy from blocks away — and in the end it will transform 35 acres of prime real estate into a modern retail/office/residential campus.

We were particularly intrigued with this rendering, which shows office space to the west, bordering both the stadium and Snelling Avenue: 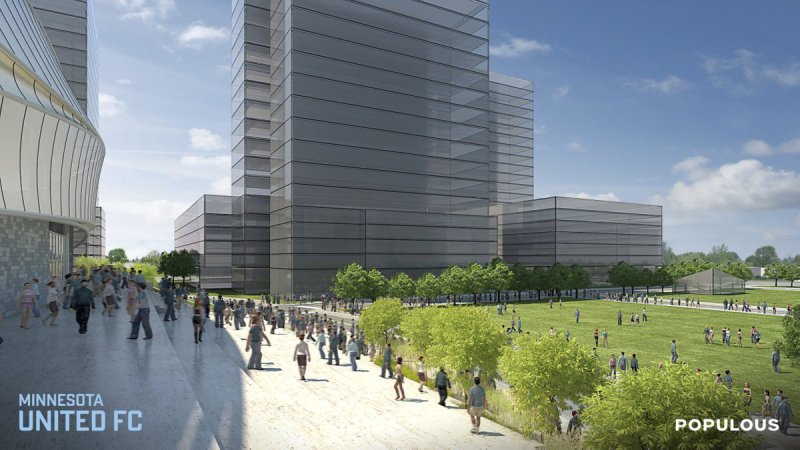 This represents a future Midway development of considerable larger scale than exists in the area and will make for some dramatic change in the area. Right now the stadium would be located on a bus-transfer station bordered by Snelling Avenue and Pascal Street on the east and the west and I-94 to the south. Right now the surrounding area includes the Midway Shopping Center — a very tired strip mall that opened in 1960 — and other retail to the east. But the Snelling and University intersection, one of the busiest, is to the north of the stadium location, and Snelling Avenue is a major interchange. The Green Line runs on University Avenue to the north, and the team expects many fans to arrive at the stadium via light rail, allowing for a dense site plan that may not have enough parking to please some.

But those plans will come down the pike, as more information about the site becomes available. Last week this proposed site plan was released for public consumption, and we’re also showing an overhead of how the stadium site currently looks: This plan won’t happen quickly — the redevelopment of the Midway Shopping Center could take five to 10 years, although the area around the stadium could see development sooner. From the Pioneer Press:

Previous concept plans had left some employees of the shopping center’s 30 or more businesses nervous. From the Midway Pro Bowl bar and bowling alley to the Peking Garden restaurant, some 400 workers occupy the site.

“We met with our landlord (Birdoff) two weeks ago,” said Alan Loth, a co-owner of the Midway Pro Bowl. “We had about 20 of the tenants in attendance, and we were assured by our landlord that all of our leases would be honored and he wasn’t evicting anyone.”

Loth said he was told the redevelopment of the Midway Shopping Center would take five to 10 years, “which we will be very happy to be a part of.”

Here’s a look at the other renderings released today: