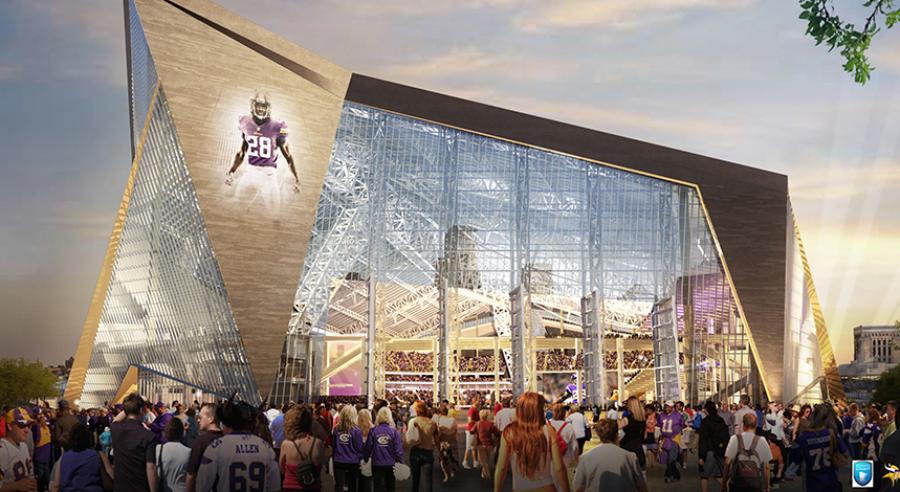 Minnesota has been repeatedly mentioned as a potential MLS expansion market, but to date most of the talk has centered on the NASL’s Minnesota United FC owner Bill McGuire pitching for a new stadium. New stadiums have popped up a-plenty in the Twin Cities in recent years — TCF Bank Stadium, Target Field, a new St. Paul Saints ballpark and the under-construction Vikings replacement for the Metrodome — and there’s a definite soccer constituency in the state.

Which is why Mark Wilf met with MLS President and Deputy Commissioner Mark Abbott on Monday to discuss how soccer could be played at the new NFL facility. Truth is. the new stadium is really a multiuse stadium in disguise — college baseball will be played there in the spring as well — and tools for reconfiguring the field were already in the plans. Accommodating a soccer pitch on what was designed as a baseball field is probably what’s in the works.

The Vikings are teaming up on their MLS bid with Relevent Sports, which organized the Guinness International Champions Cup in 2013 and promotes other European friendlies, including an Aug. 2 match between Manchester City and Olympiakos at the University of Minnesota’s TCF Bank Stadium. From the Star Tribune:

“I’m not sure if we have a specific plan of ‘here’s what’s going to happen by Aug. 1,’ but certainly our intention is to work through this stadium design with MLS and our architects to get it in position,” said Vikings Vice President Lester Bagley, the team’s point man on the stadium development. “I think we’re going to be busy, aggressive over the next 2-3 months over the summer, do the game right, and at the same time work with MLS and work internally to put a viable proposal together.”

The main advantage the Vikings have over the United group is a stadium that is already in place. United and its partners would need to finance the cost of a stadium on top of other expenses — including an expansion fee, which for recent MLS teams has been $70 million and could be $80 million here. While only a handful of MLS teams currently play in football stadiums instead of soccer-specific stadiums, the Vikings are working on a design to reduce capacity for MLS matches. Bagley also stressed the “indoor-outdoor” nature of the stadium, which has a glass roof and five large sliding glass panels that can be opened during warm-weather months. Bagley said Vikings management has also been calculating costs for a separate practice facility and team headquarters.